Are We Over Consuming?

COVID-19 has wreaked havoc on the businesses and economies of countries all over the world. Although there is one area that has benefitted from the global disruption caused by this coronavirus, and that’s the environment. More specifically, air quality has improved and gas emissions have significantly declined, all by staying inside for a couple of months and doing our best to conduct ourselves within the four walls of our homes. It begs the question - when it’s business as usual, are we over-consuming?

Nitrogen dioxide (NO2) has reduced

Nitrogen dioxide is, unfortunately, one of the most present gases in our atmosphere, but it wasn’t always like this. Nitrogen dioxide is the result of our lifestyles and industry, with factories, motor vehicles and fossil-fuelled powered electricity getting us to this alarming point. Since early COVID-19 action in January to this point in time, NASA has reported a 30% drop in air pollution in the US, and Northern Italy has followed a similar trajectory by experiencing a 10% drop every week over the five weeks they were in lockdown. China has also compared its low nitrogen dioxide levels to the 2008 global financial crisis, as well as regional towns during the Beijing Olympics.

There is no disputing that our lifestyles have caused this rampant air pollution, and there is also no dispute that we can apparently control this under the right circumstances.

It’s not only the most affected areas that have seen a huge reduction in nitrogen dioxide but India, Australia and China are also reporting some compelling statistics. Huge factories that hit pause on their operations and commercial businesses have released employees to work from home have also contributed to these reductions. Travel bans have also played a pivotal role in air quality performance. Not only NASA is seeing these measurable reductions, but you can visually see the difference.

Below is a photo of Delhi in November of 2019 and March of 2020, with the pollution having dissipated literally before our eyes. 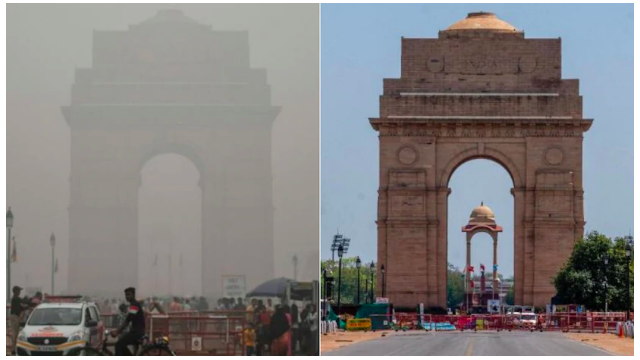 What can we take away from the environmental benefits we have seen from COVID-19?

It would be fair to say that people, leaders and cities will emerge on the other side of COVID-19 with a new outlook on a number of things. Chief among them should be our consumption levels and the detriment it has on our immediate and global environment. And the steps we take, big or small, should be toward matching these reductions we are seeing during COVID-19. Here are some ways that we can make that a reality, in all areas of our lives.

With consumption under the microscope, office and commercial buildings have the most fat to trim in this space. Sensor lighting will garner quick wins, and so will using extra-large cartridges instead of standard sizes to reduce consumption and print costs, and overall ‘single-use’ behaviour. There might also be new precedence following the success of working from home, with more businesses exploring this option and reducing their headcount in the office and subsequent power/energy usage.

A quick scroll of social media will show you how isolators are spending their time, building a sustainable infrastructure through planting food sources, upcycling furniture and goods and generally looking to see how we can reduce our reliance on other sources. Chores, like exploring solar panelling and installing LED lights, are other areas that individuals are turning a problem into a benefit. Transport is another area we are seeing positive changes, with London an example when the city closed the Tube, only to later re-open and see lower numbers of commuters onboard after finding alternative transport options (bike riding) and not wanting to return to the Tube.

COVID-19 has shown how bad our air pollution was, with many believing the cities with the most pollution are the hardest hit

Not too long ago we were battling SARS, and China’s most pollution affected cities were reporting the largest death rates. Similarly, London and New York City have been substantially impacted and have some of the worst air pollution. Without our basic need of clean air being met, symptoms will knock harder given the degradation this dirty air has on its inhabitants over the years. Given that COVID-19 attacks respiratory systems, many medical experts have drawn parallels to the air quality and death rates, with these ‘ cities that never sleep’ destinations ultimately making a bad situation worse.

When considering if we are over-consuming, the answer is a resounding yes. So many aspects of our lives have become reliant on energy-burning technologies and power sources, with our isolation continuing to prove that fact, and also showing us the potential that exists when we are intentional and forward-thinking with our consumption.